Automated powder recycling for AM

The objectives of this project were threefold: 1. Develop a self-optimising sieving and recycling process which is driven by online analytical measurement techniques and real time monitoring; 2. Identify techniques which could be applied to bulk powder screening for the detection and automated extraction of foreign particles, and 3. Provide fully enclosed end-to-end powder handling with complete powder traceability.

Simulation of the build process in an AM facility; integrating a sieving system with a particle size measurement device; testing of the initial prototype system and upgraded prototype system.

The MTC were involved in the creation of the functional design specification at the beginning of the project. Next simulation of an AM factory was performed to find the process inefficiencies and the effect combining sieving and sizing into one step could have on the overall build process. The integration of the equipment into one system was performed at MTC after which the system was evaluated against equivalent offline PSD testing equipment. Doped oversize testing was performed to evaluate the system’s ability to detect differences in particle size. The remaining work for the MTC is receiving, installing and testing the upgraded prototype system and creating a promotional demo video. 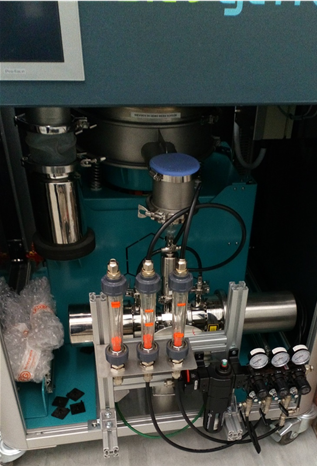