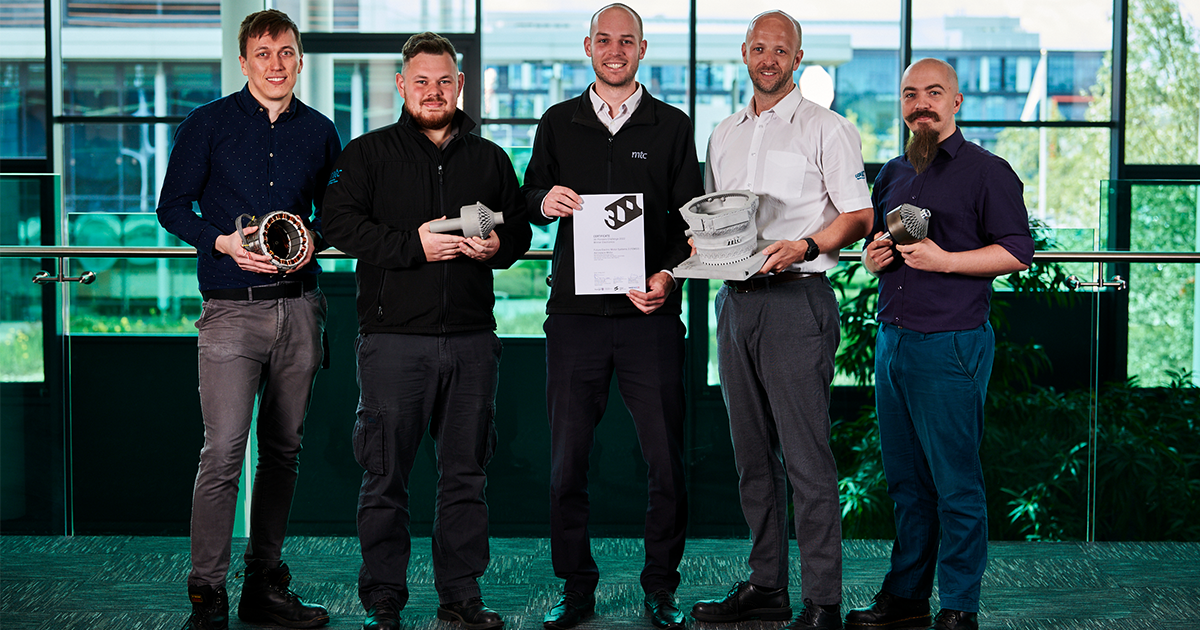 A team of engineers from the Manufacturing Technology Centre has  scooped a top innovation award for the development of a high-powered electric motor which is smaller and lighter, thanks to advanced manufacturing technologies.

The team redesigned an MTC-designed motor casing for a lightweight aerospace application. They used additive manufacturing technology to combine three machined components, eight fasteners and three o-rings into a single part. The result was a motor which has a reduction in mass of more than 65 per cent, is much simpler to assemble and has eliminated multiple seals.

The team also used high value design tools and AM manufacturing processes to redesign components in the rotor assembly, allowing four parts made from three materials to be consolidated into a single component, further reducing weight and simplifying assembly.

In their comments the competition judges congratulated the team for leveraging the advantages of additive manufacturing.

Leveraging these advantages to design and manufacture a bespoke element of such a complex product and thus system integration at such a high level is very impressive. The team achieved weight reduction of a functional electric motor, with sustainability in the overall concept. Motors consume a huge portion of energy in industry, so ideas to improve electric motors by additive manufacturing is a great lever towards higher performance and thus improved sustainability.
Competition judges
The aerospace motor we have developed showcases the potential of additive manufacturing and advanced design tools to manufacture high performance electric motors. The key benefits include being able to reduce the lifetime environmental impact compared to conventional manufacturing as well as offering a lighter motor with increased performance and greater ease of assembly.
Ollie Hartfield, MTC research engineer and member of the FEMS3 team
I congratulate the FEMS3 team. Winning this award is a great achievement. The team has demonstrated the advantages that can result from the adoption of advanced manufacturing techniques.
Danny McGee, MTC associate director

The international 3D Pioneers Challenge is organised by Rapid.Tech 3D - a German-based exhibition and conference for advanced manufacturing technologies, and design consultancy d.sign21.

The MTC aims to provide a competitive environment to bridge the gap between university-based research and the development of innovative manufacturing solutions, in line with the Government’s manufacturing strategy. The MTC is part of the High Value Manufacturing Catapult, supported by Innovate UK.